In her tireless effort to find her missing son, Billy, Janice Smolinski uncovered systemic problems with the country’s national data banks, and the way law enforcement officers collect and process DNA samples. Congressman Chris Murphy is introducing federal legislation to correct the problem, and has named it “Billy’s Law”. 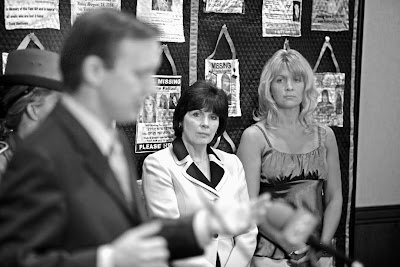 Janice Smolinski, center, watched Connecticut Congressman Chris Murphy unveil plans to upgrade the national system of the Missing and Unidentified Dead at a press conference in Hartford, CT. The legislation is being named "Billy's Law" after Smolinski's 31 year old son, Billy, who vanished five years ago.


The first time missing persons advocate Janice Smolinski met with Congressman Chris Murphy two years ago she had a difficult time reading him. They had originally agreed to meet at a coffee shop in Cheshire, but Murphy had to reschedule, and they ended up meeting inside his office in New Britain.

The meeting lasted 45 minutes and Smolinski said she did most of the talking. She told Murphy about the 40,000 unidentified human remains being stored around the country. She told him about the 160,000 missing persons in America, and the difficulty using national data bases to try and connect DNA samples from the missing to the unidentified dead.

“I threw a lot of information at him and he didn’t say too much,” Smolinski said. “When I left the office I didn’t have a good feeling. It didn’t seem like he had grasped the enormity of what I was saying to him.”