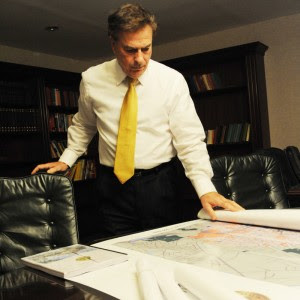 
Praised by economic development directors as a visionary and honored by planning groups, his passion has also sparked a police investigation over a death threat.

There are developers who dislike him simply because he’s beaten them on projects, while others believe his ideas are hyped-up hogwash and unworkable.

“Don Monti has good ideas, but I hope you live long enough to see the projects completed,” said developer Jerry Wolkoff, who is working on his own smart-growth project, redeveloping the former Pilgrim State psychiatric complex.

“It’s not that other developers throw rocks at Don,” said Eric Alexander, executive director of Vision Long Island, a leading smart-growth advocacy group. “It’s that they want to pull the rocks out from under him.”

The seeds of Monti’s discontent

To get a feel for what triggered Monti’s reformation, you need only take a quick spin around Long Island and peek at the family portfolio.

For 35 years, he had a center seat at the big table, serving as developer, contractor or consultant on more than 100 projects, many of them huge, car-centric developments that sprawled in all directions and emphasized private as opposed to public spaces.

Monti was seven when his family moved from Brooklyn’s Cropsey Avenue out to Wantagh, a few stops east of Levittown, the buckle on suburbia’s belt.

Another wing of the family owns the fashionable Crest Hollow Country Club, but the Wantagh Montis were builders. So after lettering in baseball, basketball and football at Levittown High, Monti gave college a pass, impatient to get into the business.

It didn’t take him long to get started. Just a few years out of high school, he developed an indoor tennis center and travel agency in North Merrick, the first of a long string of projects that would include hotels, housing developments and two dozen shopping centers.

Back in the day, Long Island’s master builder was Robert Moses, a man who never saw a bag of cement he didn’t immediately fall in love with. As New York’s development czar, Moses spent billions facilitating the Manhattan migration, laying down roads in lieu of a modern rail transit system, etching the Island with an expressway and six parkways, then building massive interchanges to connect them all.

The young Monti saw the future clearly, and that was paving over scrub and sand, and letting steel, glass and concrete rise up next to all those thruways.

And for more than 30 years, it was all good. Good for Monti, good for Long Island, good for pretty much everyone.

It was the kind of development people wanted right up until the time they didn’t want it anymore.

For Monti, the “kick in the head” revelation of the future came in 2003. He’d jumped into the byzantine political process of revitalizing Glen Cove’s waterfront and selected a prominent New York City architectural firm to design – what else? – a high-end development full of sequestered Montmansions.

“They came back to me and said, ‘If you want a gatehouse and cul-de-sacs, we’re not going to do it,’” Monti said.

Public space was the future, his architects said. Developers had to think inclusion rather than seclusion. It was the right thing to do. And it was where the market was heading.

By 2006, Monti was back with a new plan to clean up the 50-acre Glen Cove site, a former munitions complex that was poster-child perfect for the term “brownfield.” There had been one other important change: Ralph Suozzi had taken over as Glen Cove’s mayor.

To say Monti and Suozzi were incompatible is a wild understatement. “They can’t stand each other,” said a reporter who covered the development meetings.

The mayor didn’t return several phone calls requesting an interview for this piece. But it’s no stretch to say he thought Monti and his team, including developer Michael Posillico, were stubborn, unqualified and in over their heads on reclaiming the contaminated parcel.

That September, Monti was up in front of Mayor Suozzi and the city council, pitching his new plan of open space and mixed use, a Mystic-style community that would include four 16-story towers with a hotel and condos.

The meeting was raucous. Civic organizations and the mayor opposed the height and density of the project. Some worried the hotel was a bait-and-switch hustle to make way for more residential units.
According to one onlooker, the atmosphere was poisonous. Monti was visibly angry at all the opposition and everyone else was “rude and outrageous.”

Monti, in full pitch, was finally interrupted by Mayor Suozzi and informed that his time was up. At that point, according to a resident who later went to the police, Monti muttered, “He’s a dead man.”

Monti denies having said anything, and the police investigation went nowhere. The cops did guard the mayor’s house that night, however. The resident, police said, was a credible witness who was within a foot of Monti at the time of the alleged remark.

Suozzi said he didn’t hear anything during the commotion of the meeting. But, he noted, “When there’s a lot of money at stake, like in this project, you never know what could happen.”

So, the end of Monti’s dreams of redeveloping Glen Cove? Not exactly.

At the urging of Suozzi, developer Scott Rechler joined the Monti team, and the project recently cleared zoning approval. When Rechler and Monti met with Suozzi, Monti brought along an eraser, a symbol that he wanted to make peace.

Monti now describes his relationship with the mayor as cordial.

From villain to visionary

The target population for Monti’s new downtowns is a combination of millennials and boomers. Fifty percent of both generations express a desire to live in a walkable, downtown setting, according to the Long Island Index.

“This begins to solve Long Island’s brain drain,” Monti said. “There’s nothing for young people on Long Island today. Nothing.”

Statistics back him up: 65 percent of 18- to 34-year-old Long Islanders are likely to pull up stakes in the next five years, according to a recent Long Island Index survey.

Thomas Galligani, economic development director for Nashua, said Monti blew the competition out of the water when he came on the scene.

“Don’s a visionary, and he’s certainly a salesman, but that’s what our project needs,” Galligani said. “In this economy we need ambition and positive vision.”

Local developers had said they would buy property from the city but wanted to proceed cautiously because of the economy.

“They just wanted to sit on it,” Galligani said. “Don wants to develop it.”

Two Connecticut communities, Waterbury and Bristol, have also signed on for Monti-styled redevelopments.
Monti’s 100-mile-an-hour, sole-man-in-charge style is an act of war for civic associations and officials who rely on visioning sessions and charettes, in which entire communities come together in the planning process.

“I don’t believe charette is a dirty word,” Monti said, “but have planners do what they’re trained to do and not what they’re told to do.”

Monti said he’s patient, but only to a point. When he presents his ideas he realizes Renaissance Downtowns is being closely, and often slowly, analyzed.

“But I grade municipalities too, and if you don’t have the political will to lead, well, let me just say I’m sought after all over the country.”

“His act is good and he is saying a lot of what we agree with,” said Freudenberg, who also doesn’t disagree with Monti’s ambition to let professional planners lead rather than follow. “But you have to have a community approach to planning,” he said.

Hempstead Town Councilwoman Dorothy Goosby said Monti’s ideas about millennials and boomers living happily ever after in revitalized downtowns can exclude the African-American and Latino communities.

“They’ll make rents in these places so high many people can’t afford to live there,” Goosby said. “I don’t see it working on Long Island.”

Monti counters by saying his vision is for everyone. Well, everyone who decides to stay.

“Everyone is leaving Long Island, not just one group,” he said. “I’ve spent millions of dollars and will continue to spend millions until my message of change is heard.”

With that, Monti is on the run once more, fielding questions as he goes. How does he unwind, he’s asked. He doesn’t seem to understand the question at first, but then catches on. He says he has a boat berthed out in Greenport.

(Editor's note - Leo Frank, the executive director of the Waterbury Development Corporation, e-mailed the Observer a copy of the following letter written by Glen Cove mayor Ralph Suozzi, in response to the article in the Long Island Business News) 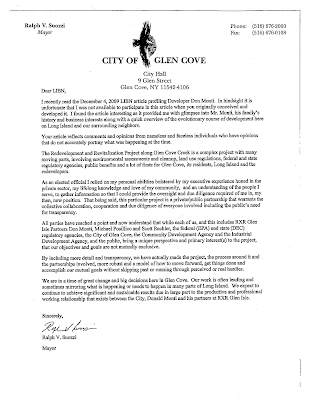