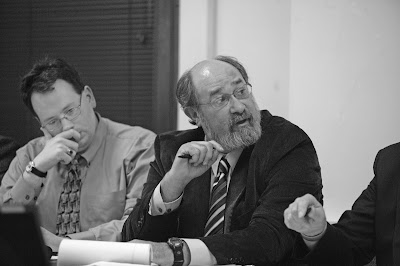 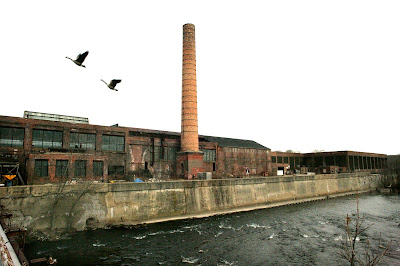 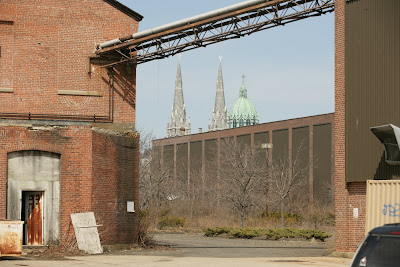 
The question haunted Schrag, and after the trash plant was defeated, he set out to find alternative solutions for the Anamet site. Schrag had a paradigm shift.

“I don’t want to be against everything,” Schrag said. “I decided I want to be for something.”

As a result he helped form WCLEAN, the Waterbury Clean Environment Action Network, and they are developing a proposal to transform the Anamet site into a green jobs training center with a neighborhood park and a large community garden. 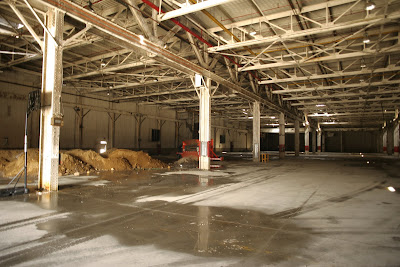 After fierce and near unanimous community opposition forced Chestnut Hill BioEnergy to withdraw its plans to build an energy plant, Schrag and WCLEAN contacted the owner in California to see how receptive he was to alternative ideas.

“We had a conference call with the owner and he assured us he is open to exploring other ideas for his property,” Schrag said. “It was a good first step.” 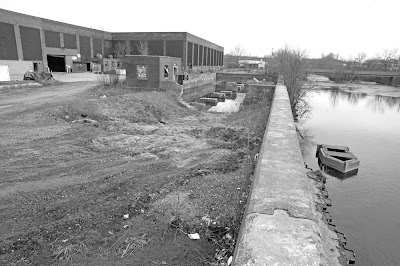 The group then gathered information that might help transform the abandoned site into a 21st Century training center where workers can learn to install solar panels, maintain and operate fuel cell generators, become energy auditors, and learn about the lengthy process of brownfield remediation. Schrag said the center would be regional in scope and focus on unemployed and displaced workers.

“The #1 issue in the state isn’t our budget,” Schrag said, “it’s jobs. People aren’t working, so they’re not buying things and not paying taxes. We have to do something different, because what we’re doing isn’t effective.”

Schrag recently received the “Tony Mazzocchi” award from the Occupational Health Section of the American Public Health Association at the Association’s annual meeting in Philadelphia. The national recognition was based on his extensive and innovative work training health and safety educators and partnering with community and environmental groups, resulting in improved health through prevention.

The press release announcing Schrag’s award said, “A dedicated worker trainer, Schrag has conducted workshops, seminars and conferences for more than 11,000 workers since 1985. Formerly the Eastern Region health and safety coordinator for the Service Employees International Union, he now works with 1199-SEIU in New York, where he has developed a network of 75 worker trainers. He is currently developing a “green” jobs leadership training to ensure that health and safety is included in all aspects of the new green economy.”

WCLEAN’s work has been inspired by a Green Jobs Training Center in Philadelphia that transformed a Civil War uniform factory into a state of the art training center for green jobs. Part of WCLEAN’s concept revolves around the creation of a business incubator that will help launch small business in the region, and help transition the Naugatuck Valley into a sustainable green economy,

“Waterbury has 40 Brownfield sites,” Schrag said. “Why can’t Waterbury be the leader in cleaning up brownfields in this part of the state. We can be the leader in the valley by taking liabilities and making them assets.”
The idea is to take an old brownfield and make it green.

“What a wonderful metaphor for a new Waterbury,” Schrag said. “Training is the key. We need to train people to do environmental remediation and solar installations. China is making most of the solar panels, but they have to be installed and repaired here. Who is going to perform those jobs?” 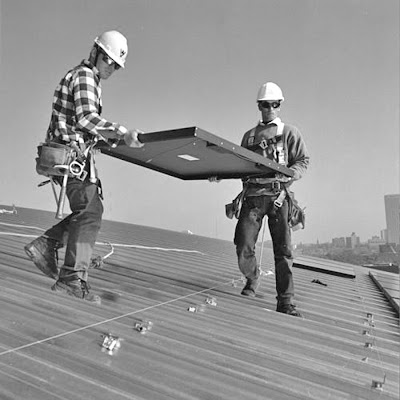 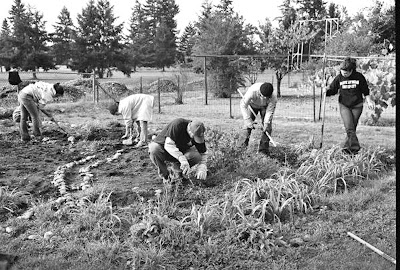 “Why not build a park next to the Greenway along the Naugatuck River?” Schrag said. “It could serve both the South End and Brooklyn neighborhoods.”

Schrag proposes to work with NVCC, Post College and UConn in a collaboration. He has contacted the Yale School of Forestry and he has spoken with Cathy Awwad at Workforce Connection. The idea has been endorsed by the Waterbury Neighborhood Council, and WCLEAN is trying to set up a meeting with the state delegation to pitch the idea to them.

“This is not a quick process,” Schrag said. “This may take a few years to get going, but we have to start. Everybody says this is a great idea, but they want to know where the money is.”

Ahh, the money, and to that there is no easy answer.

WCLEAN is looking into the possibility of a public-private partnership with Waterbury where the city purchases the property and WCLEAN will develop it, and transform it into a training center and business incubator.

“We are considering many options at this point,” Schrag said. “And we know the key is to have this project economically sustainable.”

Schrag has met with Hank Paine to discuss the possibility of launching the training center in the vacant 120,000 square foot Howland-Hughes Building. which would provide the project a toe-hold as the Anamet site gets cleaned up and developled.

Schrag has met with Craig Russell, the executive director of the Loyola Project in the South End. Loyola is trying to revitalize a several block square around St. Anne’s Church that is blighted and boarded up. Loyola has received hundreds of thousands of dollars in seed money from city taxapyers to launch it’s initiative, and Schrag said there might be possible collaboration opportunities bewteen WCLEAN and Loyola.

“It’s all part of the same puzzle,” Schrag said. “Drive up and down South Main Street and it looks like Berlin after WW II. If we can get this to work it would be a great project for the South End, and we would create jobs that people could walk to.”

Schrag believes the city can purchase the property for $1.4 million, and WCLEAN is cobbling together a detailed plan to seek brownfield funding. “This is not going to be easy,” Schrag said, “but nothing worthwhile ever is.”

Waterbury lost the brass industry 30 years ago, and for many in the city, we lost our direction. Schrag belives Waterbury must have a vision for its future, and it’s critical city leaders develop one quickly - because brass is not coming back. 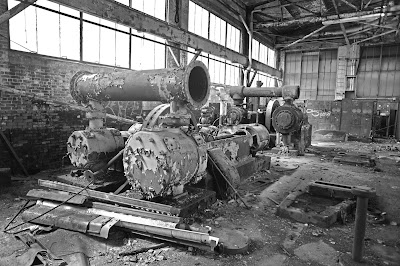 Schrag moved to Waterbury in 1980. “In the past 30 years Santopietro gave us a $100 million dollars in bricks along East Main Street, and the state invested $200 million in the Palace, UConn and the Magnet Arts School. This is not economic development,” Schrag said. “What did we buy with the $300 million? Where are the jobs? We still have the highest unemployment in the state.”

While seated inside the Barnes and Noble Cafe, Schrag admidted that the clean-up of Scovill’s and the construction of the Brass Mill Mall was significant, However, “when you look at the mall, how many good jobs are here? Maybe fifty. There are lots of service jobs that pay minimum wage, but where are the jobs that can give you dignity and let you move ahead in life?”

It’s the abscense of good jobs in Waterbury that drives Steve Schrag to pursue WCLEAN’s mission for a training center, and what better way to do it than have the community solve its own crisis.

“We can’t just put a worm on the hook and try to catch a big fish,” Schrag said. “Every community in the state is trying to catch that same fish. But if we scratch at the earth, plant and grow corn, we’ll be different. I would much rather farm than fish.”

And it’s a nod to our storied history that inspires Schrag.

“This is how the brass industry developed here,” he said. “We didn’t have an economic development agency back then. We don’t need some developer flying in here with some grand idea. Our answer should be organic, and should come from within. Brass happened in Waterbury from the ground up, why can’t this?” 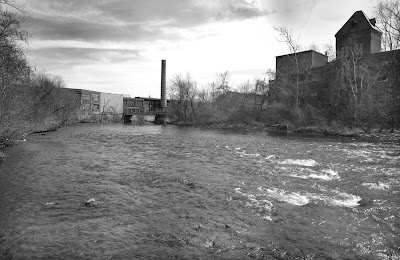 Schrag’s son Aaron is graduating from UConn this Spring and is headed to NYC to accept an accounting job.

“I would love it if Aaron could find a great job here in Waterbury,” Schrag said, “but there are no incentives for college graduates to come home. For what?”

This reality drives Schrag to work even harder to change the landscape in Waterbury.

“Why should kids stay in school and graduate? They don’t see anything for them. They’ll end up in service jobs whether they drop out or graduate, so what’s the difference? We have to create different options for the youth of this city. We need to fight for good jobs. The most important issues facing Waterbury is the unemployment rate and the dropout rate. They are not unconnected. We have to provide high school students in Waterbury an incentive to stay in school and graduate. And the best way to do that is to create good jobs.”
Posted by John Murray at 9:21 PM